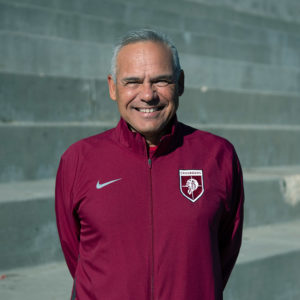 A well known local soccer fixture, Rene Miramontes brings over 30 years of experience to the club.

Miramontes, who has maintained his USSF “A” coaching license since 1988, was
named the NSCAA’s National Coach of the Year in 1993. That same year he earned both US Youth Soccer’s regional and state Coach of the Year honors.

While at SDSU, Miramontes was a standout defender for head coach George Logan. He played four years (1976, 1977, 1979 and 1980) and captained the team to a combined record of 26-7-4 during his final two seasons. After college, he played two years of semi-pro soccer in San Diego.

Miramontes takes great pride in having built San Diego’s Barrio Youth Center from the ground up and continues to support the recreation program that he developed and implemented in 1982.
In 1986, his coaching career began to take shape as he worked as an assistant coach for the nascent Cuyamaca College soccer team and also took the helm of El Cajon’s USA soccer club as their director of coaching. He continued assisting at Cuyamaca until earning head coach honors in 1994.

He served as an assistant coach for “Mooch” Myernick’s Colorado Rapids (MLS) from 1997 to 2000. During his tenure, he assisted the Rapids to a 63-61-4 mark over four seasons.

During his distinguished career Miramontes has coached prep soccer at San Diego, Granite Hills and West Hills high schools, served as an ODP district and regional coach, was an Olympic Development staff coach for CYSA, worked as a lead instructor for the Amateur Athletic Foundation, was an assistant head coach for the U.S. Olympic soccer team, acted as both an amateur and U-14 coach for US Youth Soccer’s Region IV, is president and founder of Advanced Soccer Concepts, was technical director for SDSU, was a member of the national staff and a national liaison for Hispanic affairs for NSCAA, is a U.S. Soccer National Instructional senior staff member, assists with the U.S. Paralympic National Soccer Team, was an Adidas ESP staff coach for their Germany tour, was a U.S. Soccer national staff coach, and sat on the MLS advisory committee.

In addition to his USSF “A” license, Miramontes was awarded an NSCAA Premier Diploma with Distinction in 2001. His accolades also include the LASCA lifetime achievement award and being named to San Diego’s 100 most influential people in soccer.

A Los Angeles native, Miramontes was raised south of the border in Guadalajara, Mexico, before moving to San Diego. He has a degree in Liberal Arts with an emphasis on Bilingual Education; minor in Spanish, and is fluently bilingual. He resides in San Diego with his wife, Liz, and his two sons, Alex and Eric.